Calculon - a calculator for nerds

Update December 2014: This post is now somewhat outdated, please see the github repo for more up to date information.

I used to spend a lot of time using a Python REPL as a calculator, copying and pasting values back and forth between the REPL and Calculator.app, cursing, hitting ctrl-a, typing hex(, hitting ctrl-e, and typing ). I thought “THERE’S GOT TO BE A BETTER WAY”. Now there is. 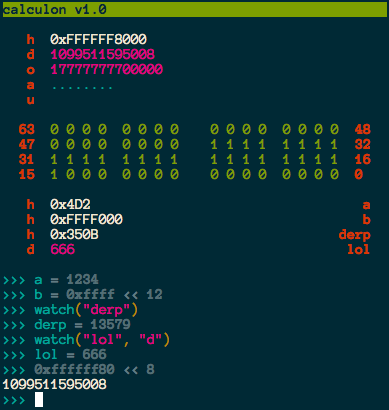 Calculon is basically a curses window jammed on top of a Python REPL (bpython initially). Any code you type into the REPL will be executed as usual, with any numeric values displayed in the interface at the top in a variety of bases and formats. There are a couple of differences to the basic REPL:

Check it out on my github.

There are a few things that I (and my pal richo) plan to do to it in the near future: